Big Chip musky historian John Dettloff”/>According to the Big Chip musky historian John Dettloff, “these are the “good old days” on the Chip. More muskies are being caught of larger average size than ever before.” In the 1970’s, records show that the average musky caught on the Chip averaged just over 34 inches. Today, the average size musky caught is about 40 inches, with numerous muskies in the forty-five inch and better class caught every year.

The fishing season of 2002 turned-out to be a great musky year on the Chippewa Flowage with many muskies caught over 30 pounds. Ideal weather conditions during early June and August through September, made for some of the most exciting musky fishing ever experienced by many of the Chip’s musky hunters.

The topwater bait was exceptional with lures, such as Creepers, Globes and Tallywackers; leading the way as the top producers. The Big Chip very well could be the best topwater musky lake anywhere. For fishing excitement it’s very hard to beat an explosive rip from a big musky on a topwater lure. 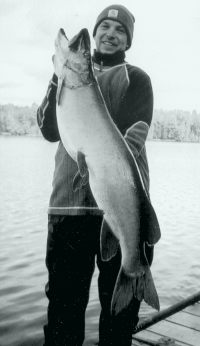 Although the topwater action on the Chip is exceptional, musky fishermen should not make the mistake of fishing the Chip like they do most musky lakes. On most musky lakes the run and gun approach works best – but not so on the Chip. The most consistent musky fisherpersons on the Chip use a slow, methodical approach. They place their casts no more than fifteen to twenty feet apart and use a slow to moderate retrieve.

June was indeed very good in the Chip, but August through September was exceptional with an explosion of big muskies caught. A spot poll of selected resort musky charts revealed that twelve muskies over 45″ were caught in the first three weeks of August.
The sizes were:
2@ 46.5″       1@48.5″

September yielded a number of muskies mostly in the lower 40’s. November’s fish were more in the upper 40’s. One of the biggest catches came in early October, a 51″ fish. But biggest isn’t always fattest. Pictured above is a 30lb 3 oz, 47″ clear muskie caught by Joe Fuerst.

The Chippewa Flowage is home to some of the biggest muskies in the musky world and holds the current all-tackle world record – a giant muskie, caught by Louie Spray, that tipped the scales at 69 ponds, 11 ounces and was 5 feet, 3 inches in length! Are there larger muskies than the current world record that still swim the fabled waters of the Big Chip’ Who knows – maybe you could be the next lucky angler’

A Few Clouds and 51 F at Sawyer County Airport, WI

RSS Error: A feed could not be found at https://www.townofhunterwi.net/feed/. This does not appear to be a valid RSS or Atom feed.

Post-ice fishing check in on the Pike Improvement Project

It’s March, which means the pike get a 2 month break from being targeted by anglers. The Pike Improv

Vacation on the Chippewa Flowage