This past fall marked the running of the second annual Musky Hunt 2000. Held September 7th through the 9th and sponsored by the Lake Chippewa Flowage Association and the LCO Casino, Musky Hunt 2000 was enjoyed by 167 participants. A catch & release musky tournament that stresses a more non-competitive atmosphere among its entrants, our Musky Hunt is geared to give all contestants a better chance to place in the event by not allowing multiple catches to give a cumulative standing but rather rank each individual catch separately to place. Our contest goal is to produce a fun musky fishing event, during more comfortable weather conditions, and to stress camaraderie and sportsmanship. 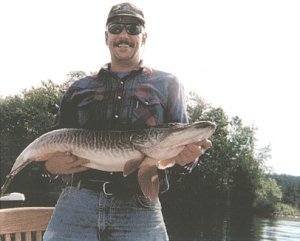 Wade Hamm of Bloomer, WI, released the First Place fish.
It was a 45 3/4″ Musky, which was also his first legal Musky, caught mid morning on Friday.

About half an hour later his brother Randy Hamm of Cadotte,
WI caught and released the second place fish, 45 1/4″. 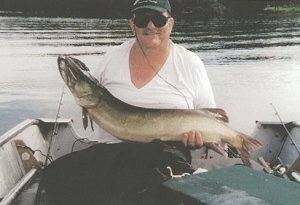 Two brothers from the Bloomer/Cadott areas of Wisconsin, the Hamm Brothers, ended up taking first and second place in Musky Hunt 2000, winning for themselves a 2000 15 HP Mercury outboard motor for first place and an underwater camera system for second place. Wade Hamm usually fishes for panfish, bass, and walleye. The first time he ever went musky fishing was during our 1999 Musky Hunt, after his brother Randy had his tournament partner cancel out him at the last minute. Wade enjoyed the event and quickly caught musky fever…returning to Musky Hunt 2000 with much enthusiasm.

On September 8th – during the contest – Wade hooked a beautiful musky on a Bobbie Bait at about 10:15 AM off the point of one of the flowage’s many islands…a place which has been famous for producing many a big musky catch. His brother Randy coached him well and the result was Wade catching his first legal musky of 45-3/4″ and the first place winner of the whole event.

But these brothers weren’t through yet: for, within the hour, Randy had caught a fine musky of his own (45-1/4″) in the same vicinity on a gold & white Hughes River lure. This catch earned Randy a second place finish in our contest. Well acquainted with the wonders of the flowage, Randy has been fishing the Big Chip for the past ten years and you can bet he’ll be back for another ten, twenty, or maybe even thirty more years. These are two brothers who are definitely hooked on the flowage.

Winning third place with a 42″er he caught on September 7th on a suick was Jay Weigen of Hayward. He won a Shimano Calcutta 400 musky reel and St. Croix Im6 musky rod. Ronald Pdrys took fourth and a Shimano 400 musky reel for catching a 38-3/4″ fish on a crane bait on the 7th of September.

Fifth, sixth, and seventh place winners were awarded Ambassaduer 6500C musky reels on St. Croix IM6 musky rods. Bob Brekke of Kiel, WI took a 36 inch’r on a Bobbie Bait on September 9th, Mark Sikora of Milwaukee, WI nailed a 35″er on a black bucktail on September 8th, and Bob Hammond of Couderay, WI caught a 34″er on a black bucktail on September 7th…getting each of these men fifth, sixth, and seventh place finishes respectively.
And who won Musky Hunt’s 2000’s grand prize – a 25 HP Mercury outboard motor on a 14′ Northwoods 1467 boat and trailer, donated
by the LCO Casino and Convention Center? It was Todd Trapp, a participant who didn’t even have to catch a musky to win. for this prize was drawn by random out of the entire field of registrants at the awards ceremony.

RSS Error: A feed could not be found at https://www.townofhunterwi.net/feed/. This does not appear to be a valid RSS or Atom feed.

Post-ice fishing check in on the Pike Improvement Project

It’s March, which means the pike get a 2 month break from being targeted by anglers. The Pike Improv [...]

Vacation on the Chippewa Flowage